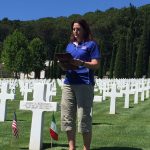 So, I realize that it’s been a while since I last posted what’s been going on in my teaching life.  Quite a lot actually!

In 2015-16 I was fortunate to join seventeen other teachers from across the United States to participate in a program meant to reinvigorate teaching about World War II in classrooms across the world.  Understanding Sacrifice is a joint project between the American Battle Monuments Commission, National History Day and the Roy Rosenzweig Center for History and New Media (RRCHNM) at George Mason University. I researched the life of Lt. John Anthony Boronko who served in the Mediterranean Theater as a C-47 pilot and developed a lesson plan showing how pilots’ souvenirs called short snorters help to document the experience of some of those who fought in World War II.  You can read more about that journey here.

I’m excited to use what I’ve learned and the learning of the three Understanding Sacrifice cohorts to teach an elective class next fall about World War II through the perspective of its Silent Heroes.  One of the things that I took away from my time in Europe during the summer of 2016 was how local communities in Europe have banded together to adopt the graves of soldiers buried in the ABMC cemeteries.  I am hoping that we will be able to take a field trip to the RAF cemetery at  in Terrell, Texas, in order to pass along some of the same level of remembrance here in North Texas.